I spent three hours this morning working on a blog post for a medical practice association. The topic: office romance. Oh, and the kicker? It was a poem.

Nobody can ever say my job is boring.

This is my third poem for these guys in the last year. How I became the office bard is a bit of a mystery. I remember a brainstorming session on blog topics in late 2016, and I suggested holiday party etiquette. I joked that it should be written as a parody of The Night Before Christmas and things kind of took off from there. For the record, I am most definitely not a poet, but I can crank out a decent rhyme, I guess. Here are a few lines of what I came up with:

Sally and Jack worked for Company A
Their friendship grew a bit stronger each day
Innocent talk about movies and weather
Soon led to them eating lunches together
After a while they started to flirt
They were both single – what could it hurt?
Their risqué behavior deserved an R rating
They justified it because they were dating
A few of their coworkers went to HR
Saying the relationship had gone too far
Further developments fueled the commotion
When Sally was handed a big, fat promotion
The other employees went on the attack
“She got this position because she’s with Jack!”

Keep in mind, this is a professional organization with dues-paying members. Because of that, I had to scrap my first draft, which contained the lines,

“This just isn’t fair!” they shouted in anger
“This wouldn’t have happened if he didn’t bang her!” 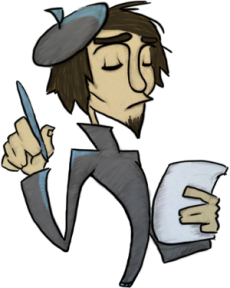 Personally, I thought that version was a much more compelling read. But tempting as it was, I just couldn’t bring myself to turn it in. I joked that I could end up being the first person in history to be fired for sexual harassment who didn’t actually sexually harass anyone.

Bonus points if you picked up on my pop culture references. I like to throw little Easter eggs into my work, just for fun. That’s kind of my trademark, as the holiday etiquette poem contained characters named Michael, Stanley, Phyllis, Oscar, Jim, Pam, Toby, Dwight, Meredith, Andy, Ryan, Kelly, and Creed. Suffice it to say, there’s a fair amount of creative leeway allowed on these blog posts.

Is it any wonder they’re among my favorite writing assignments?

2 Comments on “The Office Bard”