I’m sitting in my living room drinking a Bloody Mary and listening to an Acoustic Covers playlist on Spotify. Imagine “Girls Just Want To Have Fun” slowed down 90% and sung in a breathy whisper and you’ll have a pretty good idea of what the music sounds like. I am planning on a very chill day because yesterday nearly killed me.

Or at least my knees, which apparently are not used to being worked out to such an extreme. I am grunting and wincing in pain every time I get up. I sound like an old man, much to my own dismay. But it’s totally worth it, because yesterday turned out to be a near-perfect day.

I decided to go climb a mountain. All week I’d debated what to do with myself this weekend; Tara is in Nevada for her grandfather’s funeral (RIP Cecil) and I couldn’t take that much time off from work before our move – PTO is like gold at this point – so I stayed behind. I finally settled on the idea of a good ol’ fashioned hike. Ironically, I ruled out the one I really wanted to do up by Mount Hood because I thought the weather might be bad. Ha.

I got to Beacon Rock nice and early, 9:30 a.m., and set my sights on Hamilton Mountain, a 2,438’ peak that I’d climbed a few times in the past. I could not help but notice that the peak was covered in snow.

This wasn’t entirely a surprise; it’s been cold here the past few days, and we’ve had some snow in the foothills, so I’d come prepared with my Stabilicers® shoe traction devices and gloves. The trail started out wet and muddy, but as I climbed in elevation snow started to appear on the trail and blanketing the evergreen limbs. By the time I reached the summit, I was trudging through foot-deep snow, and everything was covered in white. It sure was pretty.

The clouds were darkening to the west, and I could tell a storm was moving in. Sure enough, right as I began the 3.5-mile trek back from the summit, it started to snow. Just a few light flurries at first, but the storm picked up in intensity and suddenly I found myself traversing an exposed ridge in the midst of an honest-to-god snowstorm. Talk about a rush!

Luckily I was prepared. My Stabilicers® (love the name, btw) gripped the trail confidently, and I was able to enjoy the majesty of a winter wonderland in March. You east coasters might be sick of snow by now, but I was one happy camper. I figured I was getting myself acclimated so those brutal South Dakota winters don’t kill me.

The closer to sea level I descended, the less deep the snow was. Eventually it gave way to a wet and muddy trail. Seven miles after setting out I arrived back at the truck, my thighs and knees screaming in agony from the effort. I drove myself ten minutes to Stevenson, where I stopped by Big River Grill for a late lunch and cocktail, figuring I’d earned myself a nice reward.

I drove home afterwards and the first thing I did was took a long, hot shower. It felt amazing. Talked to Tara for a bit, and even got to join in on a toast to her grandfather via the magic of video. I mixed myself up a Moscow Mule and parked my ass on the recliner, where I watched a Netflix documentary on WWII. Made myself dinner – a fried pork chop, paprika potatoes, and spinach, an old favorite I hadn’t cooked in years.

Because my muscles were screaming at me, I decided to borrow an Advil PM from Tara’s stash, but wasn’t thinking clearly and for some reason took two. I didn’t even realize my mistake until I woke up this morning at 7:30 – late for me – and was feeling super groggy. It took a good couple of hours until I actually felt awake.

So today is going to be a rare relaxing day for me. I’ll watch some TV, work on editing my book a bit. I’m craving Mexican food so I think I’ll walk down to Muchas Gracias later to pick up a quesadilla or somethin’. Otherwise, I’m not budging from this very comfortable spot.

Here are some more pics from yesterday’s adventure. 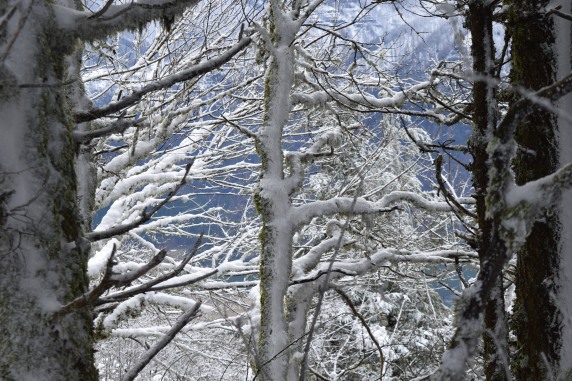 5 thoughts on “Hamilton: The Mountain”

No Time for Kings is the story of an intrepid news reporter and single mom entangled in a deadly game of cat-and-mouse with an ecoterrorist group bent on destruction and murder. Order or download a copy today!