I think I might finally be coming down from my Hamilton high. Good thing, seeing as how it ended its Portland run on Sunday. Even if I had the inclination to see it again (I do) and money weren’t an issue (it is), I’d be SOL anyway. I do see it’ll be playing in Des Moines, Iowa, of all places, in July; or in road trip terms, a mere 8 hr. and 33 min. drive from Rapid City.

Tempting, but I suppose we’ll be busily settling in then.

Speaking of the move, I’d been meaning to mention that my employer officially approved my telecommuting proposal. Feels like a huge weight has been lifted! Tara and I were fully prepared to move regardless of our respective work situations, but I have to admit, keeping a job I love is highly preferable. And working from home will be so beneficial! I’m not worried about my productivity; if anything, I bet I’ll get more done without the constant interruptions and distractions that are a routine part of the whole open office concept. And if I start to crave human companionship, our favorite coffee shop (Harriet & Oak) is downtown, and they’ve got a wi-fi connection. I can see myself going out there to work for a few hours once or twice a week.

Plus, the place has an actual VW Bus inside. 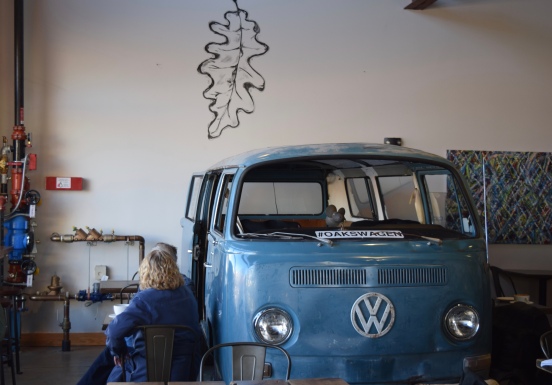 How can you go wrong with that?

The weekend was super productive – and we didn’t even go anywhere!

My big coup was selling our coffee table. We are downsizing prior to our move, a process that entails getting rid of a bunch of furniture, because

I’m not too attached to anything, so this works for me. The coffee table was nice; I’d scored it from a coworker years ago, who unbeknownst to her husband offered it to me for $35. She learned later that it had cost them $500 brand new a couple of years earlier. Oops. It took me about two weeks to sell it on Craigslist and I had to drop the price twice; I ended up letting it go on Saturday for – get this – $35. Which means I broke even a dozen years later. Not a bad deal, eh?

The guy who bought it looked to be all of 19 years old. He was probably moving out on his own for the first time. He was a super nice kid, very friendly and polite. I helped him carry it down three flights of stairs and loaded into his SUV.

As soon as he left, I posted an ad for our couch. I bought it new from Fred Meyer maybe seven years ago, and it’s in excellent condition. But Tara has never been a fan (she calls it “too soft,” as if such a thing is possible!) and we never use it; we spend all our time on the reclining loveseat, so it makes no sense to haul a couch 1,200 miles. I mean yes, at some point we will need a couch for the basement, assuming we have one, but we can always pick up something out there. I am motivated to sell and have it priced at $75, and it has already generated some interest. I just dread thinking about muscling this bad boy out the door and down those stairs, though. I plan to warn any potential buyers in advance to expect a little work getting it down to their car, and to bring help.

In any case, this is exciting. Things are feeling more and more real with each passing day. We’ve got a moving company coming out on Saturday for an estimate, and the following weekend, Audrey is moving out. Oh, yeah – guess I haven’t mentioned that either. She’ll be turning 18 and renting a room in a friend’s house. We tried to talk her into coming with us to South Dakota, but she’s not interested in that, at least not at the moment. Can’t imagine why – I just assumed all teenagers were super excited over the prospect of life on the high plains. Apparently not. In any case, we realized that we’ll be able to use her empty bedroom to store boxes in, which is great. I hate living amongst moving clutter. I imagine we’ll begin packing in earnest then.

Also over the weekend, I swung by the leasing office and picked up a NOTICE TO VACATE, which I will be filling out and turning in today. They require a 60-day minimum notice even if your lease is expiring, and since we are sitting at 75 days today, we figured we might as well hand it in. I was also given a sheet of paper listing our many pre-moving responsibilities, which seems excessive. Among other chores, we are expected to:

Tara was freaking out a little, wondering how we were going to get all this done when our plan is to leave the morning after the moving truck is loaded and even talked about pushing our departure out so we could get busy cleaning. I told her that the list we were given is excessive; we’ve lived here for over four years, and there is a certain amount of wear and tear to be expected. In any case, Tara is a clean freak anyway, and keeps the place looking better than most. I just flat out refuse to spend more than a day tidying the apartment up, so we can either have the movers come a day earlier, or hire somebody to clean for us. Maybe both. It’s just not worth delaying leaving or knocking ourselves out; worst case scenario, they bill us and we deal with it later.

No wonder they say moving is so stressful!