Home › Daily Life › All Her Suicides Are Fake

All Her Suicides Are Fake

One of the best things about this time of year is the early sunrises. I might think otherwise if I ever slept in, but I’m up super early most mornings so it’s a non-issue. Sometimes I’m out walking, like today. The sun was just cresting the eastern horizon on my final circuit through the park, lighting up the clouds in shades of cotton candy pink and fiery orange, and it stopped me in my tracks. 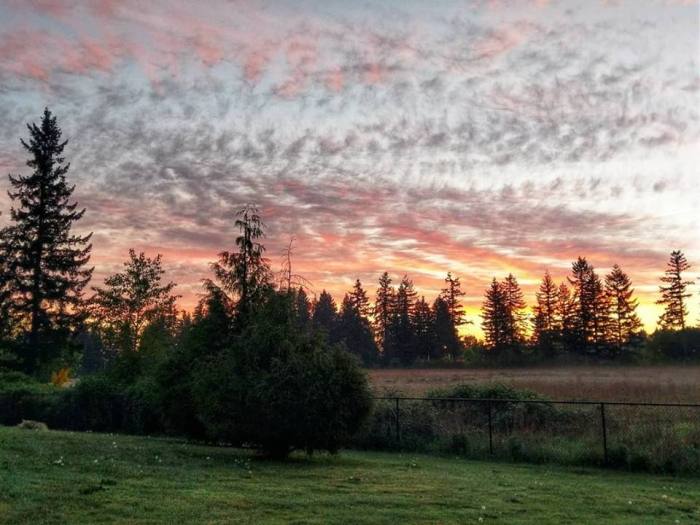 I’ve only got 45 more PNW sunrises to enjoy, so I’m going to make an effort to see as many of ’em as I can.

Are you familiar with the concept of synchronicity? I’m not talking about the 1983 album by The Police (though “King of Pain” is a great song), but rather, the simultaneous occurrence of events that appear significantly related but have no discernible causal connection. Pink Floyd’s “Dark Side of the Moon” is a great example. It is said to sync up perfectly with “The Wizard of Oz.” The band claims it’s purely coincidental, but I’m not so sure. I’ve watched them simultaneously and they really do seem to be interconnected. I’m fascinated by this stuff, because synchronicity seems to be a recurring theme in my life. I notice it all the time.

Most often these episodes are music-related. Like, for instance, I’ll be listening to The White Stripes (“I’m thinking about my doorbell/When ya gonna ring it, when you going to ring it”) and then the doorbell will ring. Things of that nature.

Saturday was an especially synchronicity-heavy day.

At one point I was scrolling through Instagram, and at the exact moment I was looking at a post from a friend named Michelle, the song playing on my phone mentioned a woman named Michelle. Earlier in the day, I was packing, and had just grabbed a Lumineers CD. At the very moment I was putting it in the box, I heard the Lumineers playing from the other room. The crazy thing is, I never listen to CDs anymore. My entire collection is packed away in a plastic tub and buried somewhere in the garage. I happened to have this one and only CD in the bedroom because it was a gift I hadn’t gotten to putting away yet.

But the universe was saving the strangest thing of all for the end of the evening. My parents are in South Africa on that safari, remember? Tara and I went over to their house to borrow their grill and barbecue some baby back ribs. We had already made several trips in and out their front door and noticed nothing out of the ordinary. So imagine my surprise when I opened the door again to grab something from my car and saw – sitting on the welcome mat, in plain sight – a freakin’ animal cracker.

Let that sink in for a moment. MY PARENTS ARE ON AN AFRICAN SAFARI HALF A WORLD AWAY AND THERE IS SUDDENLY AN ANIMAL CRACKER ON THEIR FRONT PORCH THAT WAS NOT THERE BEFORE.

I’m sure of that. The welcome mat is black, the animal cracker was white. I spotted it immediately when I opened the door. 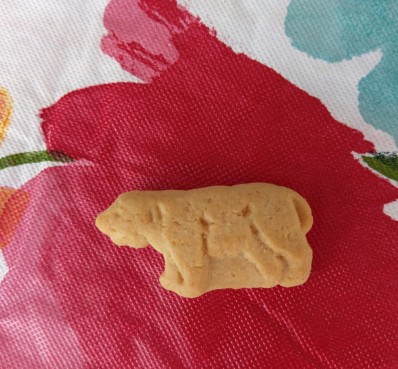 And, though I’m not proud to admit this, I nearly screamed. Because honestly, it freaked me out like nobody’s business. Even Tara, who is far more rational than I am, could offer no logical explanation. In recounting this story earlier, somebody suggested, well, a crow flying by could have dropped it.

Sure. I suppose that’s possible. Or would be if the welcome mat wasn’t located beneath a covered porch.

Another weird coincidence in a long string of them, or something more? I’m not even going to hazard a guess.

I am curious, though: does this sort of thing ever happen to you?