Home › Daily Life › That Voodoo That I Do

That Voodoo That I Do

A few weeks ago, we went through the pantry and mentally catalogued what was in there. After finding a random assortment of items – garlic chili paste, barley, a packet of fajita seasoning (to name but a few) – we began to plan dinners around those things in order to use them up. Waste not, want not is something my mom always said!

Actually, I don’t think she has ever uttered those words in her life. She also never told me to clean my plate because there are starving children in Africa and didn’t warn me not to make a face or it would freeze that way, so she missed the boat on stereotypical parenting tropes. But it’s sage advice regardless, so those odds and ends stashed on the back of the shelf turned into Asian lettuce wraps, beef and barley stew, and shrimp fajitas. Mmm, right? I’m thinking we should have cleaned out the pantry a heck of a lot sooner.

With our time here dwindling rapidly, we’re also being very conscientious with what we buy at the grocery store. Think a small bottle of cooking oil vs. a bigger one, for instance, because there is no way we’ll go through 48 ounces in five weeks, you know? I’d rather not haul boxes full of half-used groceries 1,250 miles.

Tara drove up to Tacoma to spend the weekend with her mom on Saturday, which gave me an opportunity to tie up a few loose ends.

Which is really just a fancy way of saying I ate a donut.

Not just any donut, mind you. Long-time readers will recall my fondness for Voodoo Doughnut. I mean, we even served them at our wedding in lieu of cake. Despite this, I had not been there in years, for a variety of reasons. Namely, sugar. I mostly avoid it these days for health reasons. Also, if I’m being honest, Voodoo doesn’t make the best donut in town. I’m not even sure they’re in the top five. It’s all about the experience, which includes long lines of tourists, off-the-wall flavor combinations, and a few XXX-rated sugary confections.

But the bacon maple bar is really good, and I decided I needed one more in my life before we move. 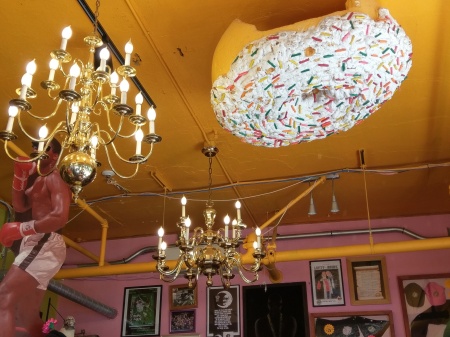 On Sunday, I loaded Sydney into her carrier for a test run. Results were mixed.

First off, she is a full-time indoor cat. Has been for her entire life, the occasional foray onto the back deck being the lone exception. So the moment I carried her outside, she was uncomfortable. Started meowing on the way down the stairs, and really let loose once we were in the car and started driving.

But she sort of settled down after a bit. These quieter moments were punctuated by periods of not being settled down. All things considered though, the experience wasn’t as bad as I’d feared. I think she will eventually accept the fact that she’s going to be stuck in the car for a while and that cat brain of hers will conclude that complaining about it is useless.

Of course, we might be halfway across Montana before that happens…