I’m sitting in our apartment on a rainy, cool Saturday afternoon in Rapid City, listening to records and enjoying a Fernson tart ale. Our friend Heidi commented that it’s funny we had to move to South Dakota in order to experience rain. No kidding! It’s been a very wet month here, with over 6.00″ of rain in June, about triple the monthly average. Hell, that’s an impressive total even by Portland standards in the middle of winter. No wonder it’s so ridiculously green!

The cool weather is a relief after a couple of hot days, though. We were also working our asses off, which didn’t help matters. After four nonstop days of physical activity, we were more than ready for a break, so we declared Friday a day to play.

Our first stop was Harriet & Oak, the coffee shop in downtown Rapid City that we first visited on our trip last October. We grabbed a table and ordered delicious coffee drinks and breakfast burritos. I am planning to spend a lot of time at Harriet & Oak, starting on Monday; they’ve got wi-fi and a nice little upstairs lounge with comfy couches and cozy tables, so I intend to take advantage and work from there at least once a week, as I do not yet have a desk or home office set up. It’ll be the perfect distraction-free “office” space for me!

Stop #2 was Prairie Berry Winery, about a 30-minute drive away in Hill City. We fell in love with their South Dakota fruit wines in October and have been ordering their wine by the case and having it shipped to us for the past eight months. It’s great to be able to go straight to the source now and buy whatever we want without worrying about paying for shipping. We even signed up for their wine club! We get four bottles hand selected by the vintner every quarter, and in return, a 20 percent discount on all purchases and access to members-only events. My parents will be proud! I feel like such an adult now.

We were most excited to visit the Badlands, and that was our next stop. Tara had never been and while I have gone too many times to count, it’s just about my favorite place on earth. Originally we were planning on staying until sunset so we didn’t head out until noon. It’s about an hour’s drive east down Interstate 90, thanks in large part to the 80-mph speed limit. We decided to stop in at the Minuteman Missile National Historic Site first; this didn’t exist when I lived here last because, well, we were actually at the height of the Cold War, and some 1,000 nuclear warheads were hidden in underground silos beneath the Great Plains. We really enjoyed the visitor’s center and learned that they offer tours of an actual silo, but you have to make reservations in advance. Next time for sure! 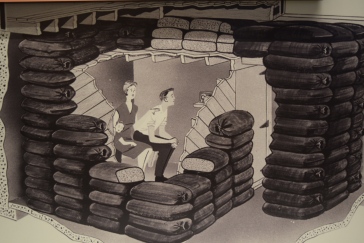 The next four hours were spent exploring the Badlands. Words cannot describe the beauty and splendor of this majestic place, but pictures always help!

It’s safe to say that Tara was impressed! (And don’t worry, Tracy – she wasn’t as close to the edge as it appears in this last photo.)

Despite the heat – it was about 85 degrees in the park – we did a lot of walking and hiking amongst the dramatic castle-like rock formations jutting up out of the prairie. Instead of hanging around until sunset as planned, we decided to head back around 5:00, because it had been a long enough day and the weather back home was turning ominous. But not to worry; I shelled out $40 for an annual pass, and have no doubt there will be many more trips to the Badlands in our future.

As we merged onto the freeway, the sky to the west was looking very ominous. We got a weather bulletin that there had been three tornados spotted in the Black Hills and there were reports of softball-sized hail, so we drove on with a mixture of trepidation and, I’ll admit, excitement. I have long been a weather geek and wannabe storm chaser, so I was both apprehensive and thrilled about the approaching storm.

A few minutes into our drive we pulled over to the side of the road to take a few pics, stepped out of the vehicle…

…and HOLY SHIT. Those prairie winds were blowing so hard (we learned later they were gusting to 70 mph), they tore my baseball cap off and nearly knocked me off my feet. I went chasing after my hat and, luckily, was able to retrieve it before it blew all the way to Nebraska. We wisely decided at that point it was best just to get back into the car and drive home. 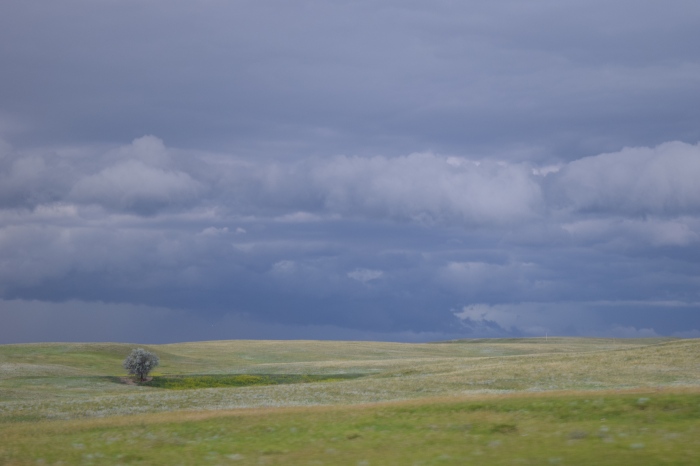 The sky continued to darken, and streaks of lightning split the horizon. 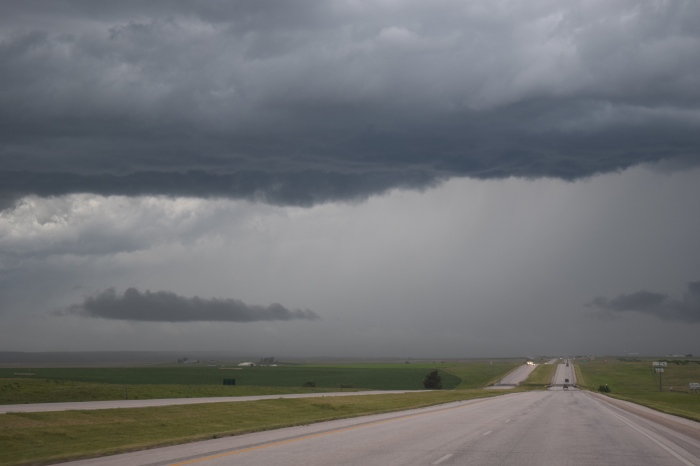 A few minutes later, the storm was upon us, and it was as though hell unleashed all its fury. Heavy rain started falling and, worse, quarter-size hail began pelting the Mazda. It sounded so loud I was certain it would punch a hole through the windshield at any moment, so we tried to take cover beneath an overpass but found half a dozen other cars already parked there. Fortunately the hail did not last long and we were able to continue on our way. There was rain and lightning the rest of the way to Rapid City, but that was nothing compared to what we had just been through.

The front page of this morning’s Rapid City Journal is devoted to the storm, and shows the damage these severe thunderstorms caused a few vehicles. One couple’s windshield was smashed in, so my fears were not completely unfounded! Man alive, if there was any lingering doubt that the weather here is more dramatic than in the Pacific Northwest, it’s all been erased after yesterday’s storm.

Today, by contrast, was much more relaxing. We hit some garage sales and ran a few errands. Picked up a cheap TV stand and a nice solid wood end table, and made a quick grocery store run to stock up on these fantastic Wisconsin cheese curds we discovered the other day. Tara was worried we wouldn’t be able to find Tillamook cheese in South Dakota, but I figured here in the heartland we’d have access to even better cheese. Sure enough, this stuff is the creamiest, tangiest cheese we’ve ever had. Our Safeway actually does carry Tillamook, but screw that. This stuff is so much better.

We’ve been here almost a week now and are settling in nicely. Rapid City is such a charming and friendly community, I think it’s safe to say we are enamored. Neither of us has any regrets about this move. As physically and mentally demanding as it has been, it was worth the hassle. It feels like we’ve arrived home.

And maybe in a few more days we’ll actually have everything in boxes put away.