Home › Daily Life › And then all hail broke loose…

And then all hail broke loose…

I’ve said it before, though never using a fruit analogy: the weather here is bananas.

Take Tuesday, for instance. Our day started out quietly enough; we decided to go for a hike along the Sunday Gulch Trail in Custer State Park. Can I just say how different the trails are out here? No ferns or towering Douglas firs, but lots of Ponderosa pines and spruce trees, and quartz, mica, and obsidian deposits so abundant they make me want to take up rock collecting. Also: no bags of dog shit scattered about. And the scenery! It. Is. Incredible. 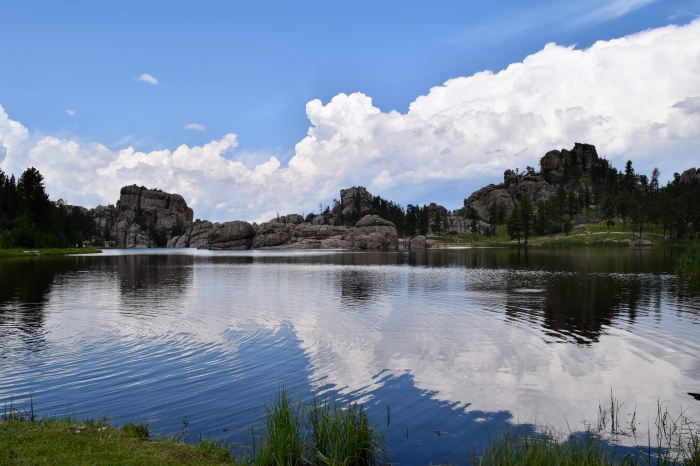 This particular hike was like none I’d ever done before. You descend into a forest, cross a stream, and then there’s a steep scramble up rocks that are covered in cascading water. It was tougher than anticipated, but well worth the effort!

During our hike, I made a remark about how unfortunate it would be to get caught in a thunderstorm. No sooner had the words left my mouth than towering dark clouds rolled in, followed by rumbling thunder. Luckily, it wasn’t anything too bad; we got a little wet but were otherwise none the worse for wear.

After hanging out at Sylvan Lake for a little bit, we drove out to Hill City to stop at Prairie Berry Winery for lunch. We decided to eat on their covered patio, and were midway through our meal when all hail broke loose. Literally. One moment it was quiet; the next, thunder roared, lightning flashed, and a drenching rain – accompanied by hail the size of ping pong balls – came crashing to earth. It was so loud under the tent it sounded like a freight train. Suddenly, there was a river of hail sweeping through the place, and it piled up about 2′ high under the gutter. That’s feet, not inches.

The temperature dropped about 30 degrees and we were suddenly shivering, so we made our way inside to find staff members mopping up water that was seeping into the place. And then on the way out, they were shoveling it off the sidewalk as if it were snow. Unreal! 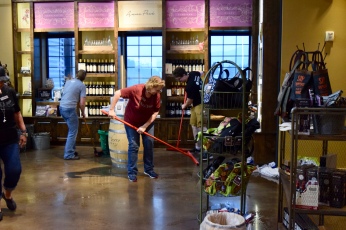 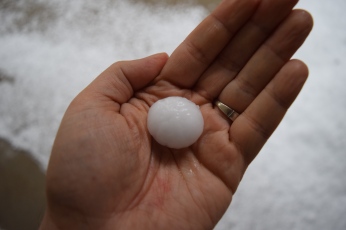 I posted a video of the hail on Facebook; feel free to check it out for yourself!

Once the hail started coming down like that, I knew my car wasn’t going to come through unscathed. Sure enough, it’s all dinged up now. Which sucks, but at least the damage is only cosmetic. As one local on Instagram commented, “Your South Dakota christening! Now your car blends right in with the rest of us!” And while I’m busy counting blessings, thank god the storm that rolled through when we were hiking wasn’t anywhere near as bad.

Sure makes for a pretty sky, though… 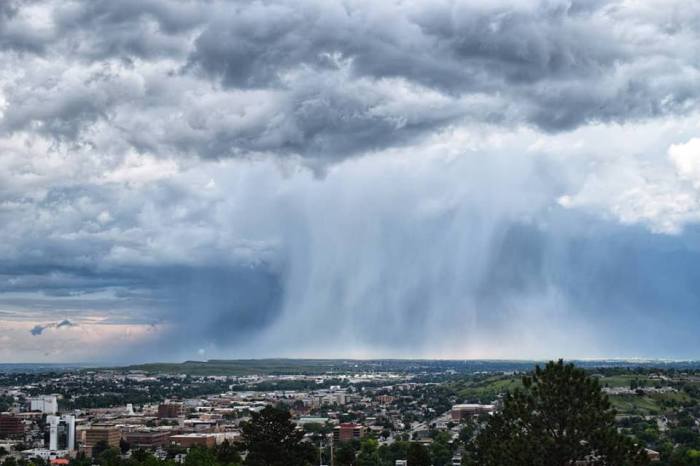 In other, non-weather-related happenings, we took a trip out to Deadwood last Sunday. I think I mentioned that we’ve been catching up on the HBO series Deadwood, a perk of Amazon Prime, so it was pretty cool to hang out where all the real-life action took place and learn more about Wild Bill Hickok, Calamity Jane, and Seth Bullock. The highlight was the Mount Moriah Cemetery, where all three are buried. Calamity Jane’s dying wish was to be buried alongside ol’ Bill, and she got what she wanted. 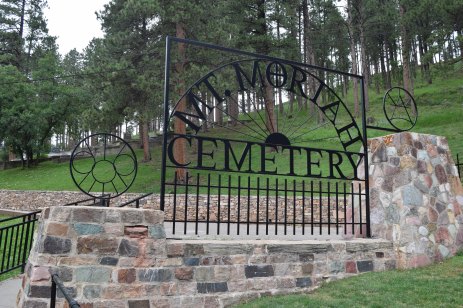 We have also discovered the wonders of Thursday nights in downtown Rapid City, where there are dueling entertainment options through August: concerts in Main Street Square, and more concerts on the Summer Nights stage on blocked-off St. Joseph Street. And here I thought our music-going days were finished! Last night we grabbed dinner at Que Pasa and then hung out in the square, drinking beer and rocking out to an 80s cover band. By the end of their third set we were actually dancing in front of the stage. Afterwards, we headed over to Press Start and totally continued the 80s theme by sinking quarters into video arcade games. They have a Tempest machine – my all-time favorite. We’re having so much fun here!

One more quick thing to report: Tara was offered a job this morning and accepted!! She made it look real easy, huh? She’ll be a commercial loan processor for a local community bank and is pretty excited for the opportunity. Since she’ll be working F/T and won’t have any PTO for a while, she’s going to zip down to Nevada for a few days to visit family and see her new nephew. Leaving tomorrow, returning Thursday. Which means I’m on my own, I guess.

If only there were fun things to do around here…