Upgrade to a King

The weather has taken a definite turn the past couple of days and given us an early taste of fall. It’s going to be short-lived, but is still a nice reminder that “summer’s lease hath all too short a date.” (Sonnet 18 is the only Shakespeare work I can quote. I’m pretty sure I memorized that one to impress the ladies once upon a time, ha.) Yesterday we awoke to a cold rain and gusty winds. The high never made it above 65, which felt wonderful, to be honest.

And then this morning I was up early for a walk around the neighborhood and practically froze my ass off. I had to put on a hoodie and quickly regretted not grabbing gloves, too. Rapid City got down to 43 degrees. Brr! It’s funny to think in a few months a temperature like that will feel downright toasty.

I sometimes forget the seasons are going to change – and quite dramatically, at that. It’s been perpetual summer here ever since we arrived, so this is all I know right now. I think that’s why this morning’s unexpected chill was such a shock to the system. It’s pretty much always been 65 degrees when I’ve gone for a morning walk. Where did this come from?!

Fortunately, Saturday’s weather was perfect, so we ended up going to the Central States Fair. Neither Tara nor I had been to a fair in years, but Rapid City’s seemed so quaint and inexpensive compared to what I’m used to, we couldn’t resist! I mean, admission cost $3 per person, and there was plenty of free parking in a grassy lot just steps from the main gate. Hell, the “gate” wasn’t even an actual gate, but a couple of wooden podiums staffed by friendly volunteers. It would have cost us a total of $29.50 to gain admission to the Clark County Fair in Washington this year, so you can understand my excitement over handing them a $10 bill and getting change back.

The fair itself was your typical county fair. We strolled the midway, checked out the arts & crafts and livestock exhibits, and ate bad-for-you-but-oh-so-good fair food. We even struck up a conversation with an oil & vinegar vendor who’d come all the way from La Grande, Oregon to sell his wares. I felt sorry for the guy because he’d traveled such a distance and business wasn’t as brisk as he’d hoped. We bought a couple of bottles but he gave us one for free and would only take half price on the others. He actually said if we come back near the end he’d load us up with more bottles for free. I guess we made quite the impression!

Funny side note: I bought a bottle of strawberry and black pepper balsamic vinegar which his card touted was “Amazing in Bloody Marys!” I asked him if he’d ever actually used it in a Bloody Mary and he just looked at me and laughed. “Hell, no!” he admitted. “That’s just something I wrote to help it sell!” Well, I didn’t think it was a completely horrible idea, so the next morning I made myself a Bloody Mary using the vinegar and you know what? It was pretty damn good.

Guy’s sitting on a goldmine and doesn’t even know it. 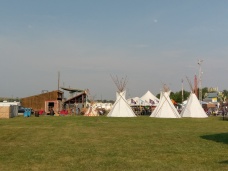 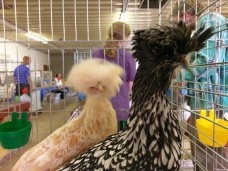 After the fair, we came home and watched the Broncos-Bears preseason football game. It was great, right up until the last few minutes.

Sunday we bundled up against the early autumn chill and headed out to Denver Mattress to buy a king bed. It looks like we might have our first visitors Labor Day weekend, as my parents have expressed an interest in flying out here. Yay! Tara’s been wanting to upgrade to a king for years and we’ll need a spare bed for guests, so it was time to bite the bullet and get ‘er done. Found one we both liked and were in and out of the store in less than an hour. The only downside? It has to be ordered from Sealy and might take as long as two weeks to arrive, so we may have to use the air mattress for this particular visit.

Speaking of the air mattress, we’ll be using it this weekend because we’re going camping. I booked us a reservation at Sheridan Lake the week after we got here (something that would have been impossible in the PNW, where you have to book a spot a year in advance these days). We’re looking forward to doing a bit of hiking, enjoying a roaring campfire, and indulging in a few of those strawberry and black pepper balsamic vinegar-infused Bloody Marys! The weather looks to be perfect, too: low 80s and dry. I don’t imagine tent camping in a thunderstorm is much fun.