Saturday was pretty much the perfect day. We zipped over to Wyoming (and by the way, how cool is it that we can actually zip over to Wyoming whenever the mood strikes) to check out Devils Tower. Tara had never been and it had been over 30 years since my last visit. Fun-but-annoying fact: there is no apostrophe in the name due to a clerical error when the proclamation declaring Devils Tower a National Monument was signed. Drives the grammarian in me a little nutty. I don’t know which I despise more: missing apostrophes or unnecessary one’s.

Heading northeast the clouds thickened and it was snowing lightly by the time the monument loomed into sight, prompting fears that we might not even be able to see it. Fortunately this was not an issue as the visitor’s center is right there. Despite the cold and snow, we hiked around the base of the mountain, a short but scenic 1.3-mile stroll that afforded us great views of the Tower from every possible angle, not to mention the Wyoming countryside – prairie and hills and Ponderosa pine forests, all blanketed in an early-season layer of snow. 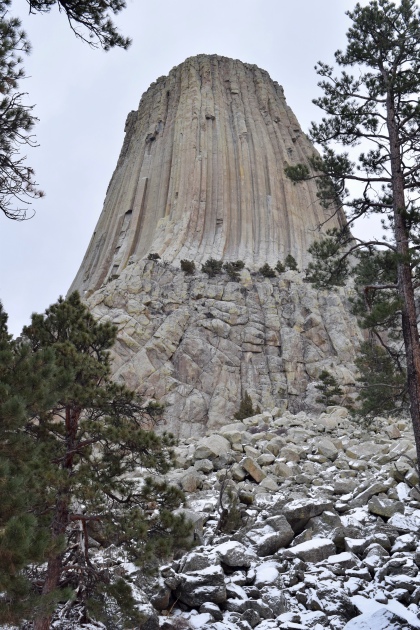 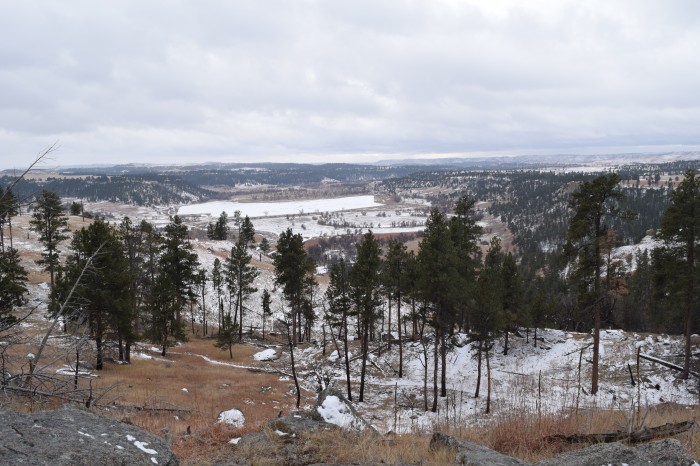 Afterward we made a loop through some pretty rural towns, each of them with successively smaller populations, culminating in Aladdin, WY. Population: 15. The whole town, it turns out, is for sale. For $850,000, all this can be yours:

The general store was awfully cute and charming. I was thinking somebody should make a television show, a fish-out-of-water sitcom about a big city couple who buys a quaint rural property and has wacky interactions with the colorful locals, but then I remembered this had already been done with “Newhart.” Oh, well. 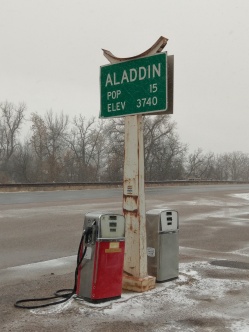 Back in South Dakota, we took the scenic route through Spearfish Canyon, where the snow picked up a bit. It sure was beautiful; all the colorful autumn leaves from a month ago are gone, but we were treated to dramatic frozen waterfalls and pretty much had the entire canyon to ourselves. More kudos for the offseason! By 4:00 we were hungry and it was already growing dark, so we stopped for an early dinner at Cheyenne Crossing, a cafe and former stagecoach stop along the Cheyenne to Deadwood route in 1878. Tara got an Indian taco and Bud Light, I ordered a buffalo burger and glass of Malbec, and we watched the snow through the window as twilight deepened. It was falling pretty thickly driving through Lead and Deadwood, but petered out by the time we reached I-90. When we got home we watched “Close Encounters of the Third Kind” as an homage to Devils Tower. 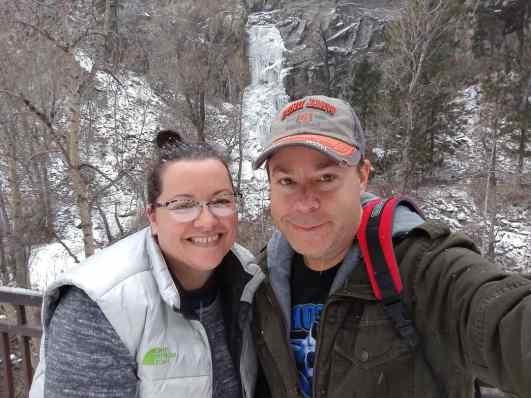 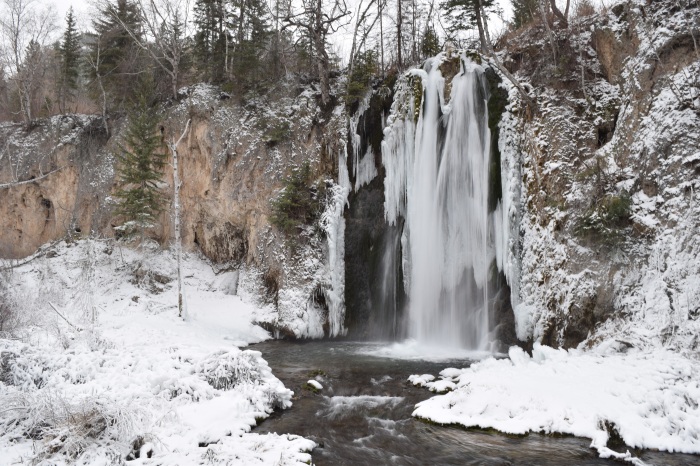 Today will be much less exciting. Unless you consider trips to Target fun, in which case, it’s going to be a blast! Tara’s making homemade clam chowder, which will be the perfect antidote for our cold weather (and possible snow this evening). It actually got down to zero on Friday! Well technically, it was half a degree. Our high was 21. This is how crazy the weather in South Dakota is: it’s going to reach 31 on Monday, 64 on Wednesday, and 42 on Friday.

Tara’s got tomorrow off for Veteran’s Day but alas, the work of a freelancer is never done. At least as long as the projects roll in, so I’m not complaining! I’ll either work a few hours in a coffee shop in the morning or, if the weather is bad, hole up in the office upstairs.

Last Wednesday, Tara’s company was offering employees tickets for the Rapid City Rush hockey game. Neither of us had ever seen live hockey before, so we decided to take advantage. The Rush are the closest thing Rapid City’s got to a professional sports franchise. They play in the ECHL, a minor league with teams scattered across the U.S. and Canada. They have no NHL affiliation this season and play their home games in the Rushmore Plaza Civic Center.

Despite a lack of knowledge regarding hockey rules – I’m still not sure what constitutes “icing” unless we’re referring to a cake – we had so much fun! And our seats were great: third row next to one of the goals. Those players were bouncing off the plexiglass just a few feet in front of us, which was both exhilarating and a little frightening. Before long we were stomping our feet and chanting “Let’s go, Rush!” with the cowbell-ringing crowd. We even bought Rush gear and within minutes felt pride for our home team even though we had never paid much attention to them before. We’re already looking forward to going back for more games. The season lasts until early April, so we’ll have plenty of opportunities.

In other news, we already have our turkey for Thanksgiving. Which is next week. Yikes!