We were driving home on Sunday after running an errand and I nearly swerved off the Interstate. I blame it on the sky.

I mean, look at that! How am I supposed to concentrate on silly little things like staying between the lines when the whole freakin’ sky is lighting up like that?! Tara was kind enough to grab my phone and snap a few pics, but that didn’t mean I wasn’t gawking.

There’s just something about these South Dakota skies. They seem more impressive than elsewhere. Not that we didn’t have some great sunrises/sunsets in the Pacific Northwest, of course. I’ve taken some pretty stunning photos there, as well. But they just seem to be on an entirely different scale out here. Maybe it’s the wide open spaces and vastness of the virgin prairie stretching nearly to infinity, or the thinner atmosphere or lack of pollution or different types of clouds (hello, cumulonimbus!) that make the difference. I dunno, but something is different about our skies.

The errand we were running, by the way, involved picking up a new artificial Christmas tree. Unfortunately, our old tree was a casualty of our last-minute desperation purge in which we were trying to cram 28′ worth of stuff into a 24′ U-Haul hours before we hit the road for our big move. (Spoiler alert: it didn’t work.) At least the tree only cost Tara less than $20 and lasted many years, so I don’t feel too badly about that. This new one looks pretty nice (or at least the display model did). It’s a 7.5′ pre-lit lightly flocked spruce with 600 clear miniature lights. We’d have just gone with a real tree this year, but our complex doesn’t allow them due to the potential fire hazard. FINE. And never mind the fact that we’ll probably have around a half dozen candles burning every night for the rest of the year, but whatevs.

We ran out to Menard’s to pick up the tree during halftime of the Broncos-Chargers game. We didn’t actually expect our team to win, given Denver’s middling-at-best season and the opponent’s stellar record, but lo and behold they pulled off what can only be described as a pretty remarkable comeback victory in the waning seconds of the game as time expired from the clock. THAT is why I love football! A spectacular sunset and a thrilling victory made for a pretty decent Sunday!

The rest of the weekend was fairly low-key. That might have been due to the fact that our high on Saturday was only 19, and it had snowed overnight. We ran a few errands and went to the movies to see “Bohemian Rhapsody,” which we both really enjoyed. I found it very entertaining and Rami Malek was a dead ringer for Freddie Mercury. Clever camera angles hid the fact that he’s significantly shorter than FM was. Could the film have delved more deeply into Freddie’s personal life? Sure. But all was forgiven when we saw the labor of love that went into hitting those high “Galileo, Galileo!” notes in Queen’s classic anthem “Bohemian Rhapsody,” and especially the step-by-step recreation of their seminal Live Aid performance in 1985. Queen was a favorite growing up; I have a fond memory of “Another One Bites The Dust” blasting over the cafeteria speakers of my elementary school one lunch hour and everybody singing along. Back when rock ‘n roll was cool, huh? 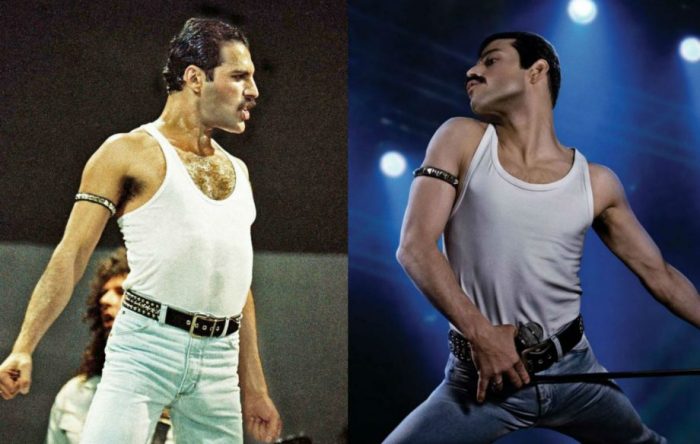 The resemblance is uncanny! Give the guy on the right an Oscar already.

I currently have a pot roast cooking in the crockpot and it has just reached the point where the smell is starting to drive me a little crazy and make my stomach growl. Practice for Thanksgiving, I suppose! Speaking of, with the lone exception of 2016 – when my parents were in the midst of a cruise to New Zealand over the holiday – this is the first year we have not hosted T-Day for as long as I can remember. That’s just always been our thing! I’ve gotta admit though, the idea of not having to cook and clean up for an army of people sounds pretty appealing. We’ll miss ’em, but I think we’ll get along just fine. There will be wine to drink and football to watch and a 10-lb. turkey to eat. Not all in one sitting, of course. I’m sure there will be days’ worth of leftovers still.

Which is kind of the point.

The west coast is burning, but hey, these smoky red sunrises sure are a nice byproduct.
I'm probably one of the last people in the world with a Netflix DVD subscription, but I do love me those white and red envelopes...and the familiar comfort of an old school movie experience on a lazy Sunday afternoon.
Friday night/just got paid.
Field of dreamy sunrises.
I love how you're so in touch with nature when kayaking. I was able to quietly paddle to within about 10 yards of this majestic Great Blue Heron before he took to the sky.
Good morning from Hartford! Walked through a charming neighborhood with stately (and some less-than-stately) homes with lots of trees. Charming little community just 11 miles from Sioux Falls. I get the appeal. I've got two interviews this morning, then I get to drive home all the way across the state. Life's an adventure!