Tara was supposed to drive to Ely last Friday to take care of house-related business and visit family, but decided to cancel at the last minute when a snowstorm in Wyoming threatened to make the trip treacherous. Because she already had a suitcase packed and was itching to hit the road, she suggested we drive to Colorado instead. We’d been talking about taking a weekend trip to Fort Collins sometime, and decided, what the heck – there was no time like the present! There were two main draws to F.C.:

If you’re unfamiliar with the former, they are a fast-food chain that serves chicken fingers. Didn’t know chickens had fingers, did ya? I first discovered the place on my road trip in 2011, when I stopped in a Cane’s in Lincoln, Nebraska. I’d only had them a couple of times since – once in Reno and again in Las Vegas – because they haven’t expanded into any of the states where I live yet. Fort Collins would give us an opportunity to satisfy our chicken finger fix.

Trader Joe’s, I’m sure you know. Let’s just say life is hard without a TJ’s in town. It’s probably the one thing I miss most about the PNW. Err…other than family and friends, of course! And while Deb from Fuel recently sent me a care package from Trader Joe’s, it was of course limited to non-perishable items. Kinda hard to send frozen food through the mail! But we had a cooler and figured we could stock up.

I should add, those weren’t the only reasons we decided to make the 333-mile, 5.5-hour drive to Fort Collins. We went seeking adventure and fun and were anxious to visit someplace new. Cane’s and TJ’s were perks. So, Colorado it was!

We hit the road early Saturday morning. It had snowed/sleeted a little bit overnight, so the roads were a little slick – especially the farther south we went, where the snow had been heavier. It was a beautiful drive though, and we passed through small agricultural towns like Lusk and Torrington, where the pace of life is far different than anything I am used to.

We crossed the Colorado border around 12:30 and made it to Fort Collins about 25 minutes later. Our first impression? Lots of people and traffic! Which is funny, because F.C.’s population is only 165,000. But that’s more than double Rapid City’s, so it felt pretty big to us.

We made the obligatory stop at Raising Cane’s and hit a couple of stores before checking into our motel. 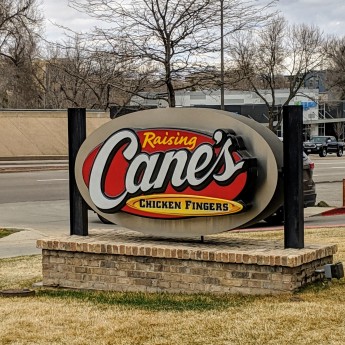 We relaxed for a bit, enjoying a cold beer before heading into Old Town Fort Collins. Our evening plan involved bar-hopping, so we decided to be responsible adults and call an Uber. Old Town Square was about a ten-minute drive from the La Quinta where we were staying, so we had plenty of time to explore.

Fort Collins is a pretty charming town. It’s got a funky Portland vibe and is definitely geared toward hipsters. It was nice to see so many brewpubs and trendy restaurants – and there is lots of public art. Fun fact: Fort Collins was one of two towns that served as the design inspiration for Disneyland’s Main Street U.S.A.

The weather was decent but chilly, so we were more than happy to step inside for a reprieve from the cold. The Crown Pub was a great first stop. In fact, we enjoyed it so much, we ended up going back later in the evening for dinner. They made an excellent Tom Collins and our appetizer of fire-roasted shishito peppers was fantastic. Eating them is kind of like playing Russian Roulette though, because – according to Wikipedia –

Whether grilled, charred, or skewered, shishito peppers add a kick of flavor to any dish. Just watch out: While the majority of these small green peppers are mild, about one in 10 is spicy enough to make your eyes water.

I knew this going in and had warned Tara, but she was game. Sure enough, right about the point where I had been lulled into a false sense of complacency and was beginning to think maybe we would get lucky and avoid one of the really spicy ones this time, I bit into a hot one. Naturally, Tara found this amusing.

Entrance to the Crown Pub.

The Tom Collins was on point!

In any case, we wandered around Old Town for a while longer, stopping into a few other places, but most were so crowded we couldn’t get a seat or it was too noisy to have a decent conversation. This is why there’s a lot to be said for living in a town of 75,000. Tara summed it up best when she posted to Instagram, Kickin’ around Fort Collins (which very much has a PNW vibe) has made me realize two things: I miss this kind of inclusive environment with left leaning ideals and a shit ton of breweries and such, and I absolutely do not miss all the damn people and traffic. It’ll be a nice place to visit and just as nice to leave.

Which pretty much sums up F.C. for me, as well. We were back at our motel by 10:00. We grabbed brunch the next morning after checking out of our room and then hit Trader Joe’s to stock up. We filled our cooler with all our favorites – frozen steel cut oatmeal, chicken lime burgers, falafel, Speculoos Cookie Butter, etc. One thing we did not pick up was their famous Two-Buck Chuck; Colorado has weird liquor laws and they aren’t allowed to sell wine or hard alcohol in grocery stores. And yet, they are super liberal with the weed. Go figure.

We pulled out of town around 11:00 and headed for home, but decided to take the slightly longer way, through Nebraska. We were dying to check out Carhenge in Alliance. Think Stonehenge, but replace the rocks with automobiles. It doesn’t get any more kitschy than this, folks! But it was so cool to see. 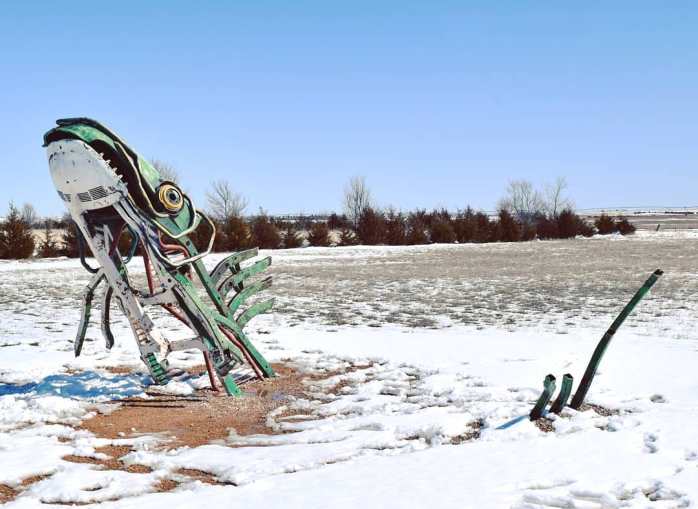 Carhenge was the brainchild of Jim Reinders, an Alliance native who developed a fascination for Stonehenge while living in England. Back home in Nebraska in the summer of 1987, he came up with an idea to create a replica of Stonehenge in physical size and placement to serve as a memorial to his father. 39 vehicles were placed to assume the same proportions as Stonehenge and the monument was dedicated on the Summer Solstice in 1987, with champagne, poetry, songs and a play written by the family. 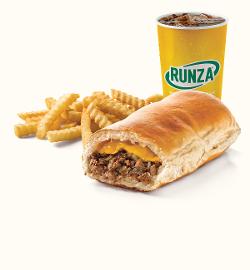 From Carhenge, it was about another 2.5 hours to home. We stopped at Runza in Chadron for dinner to go, wanting to sample this regional Nebraska delicacy. A runza is a bread pocket stuffed with beef, cabbage, and onions – another culinary treat we can thank German-Russian immigrants for. It was delicious!

Finally, we arrived home around 6:20. Talk about a whirlwind 36-hour trip! It was great fun though, and we were able to stock up on things we have missed out on.

This trip also gave us a newfound appreciation for the place we call home. Rapid City may not have a Raising Cane’s or a Trader Joe’s, and the politics may be a little more red than Colorado’s, but it’s also lacking the busy traffic and throngs of people that make finding a spot in a bar on a Saturday night next to impossible in more bustling metropolises.

It once again proves we are living exactly where we should be.