All Shish, No Kebab

One year ago, when we were just beginning the onerous task of preparing for our big move and South Dakota was this great, exciting unknown, I learned about chislic and other regional food favorites of the Midwest. Chislic is simply deep fried cubes of meat, liberally seasoned with garlic salt and other spices. It is traditionally served on toothpicks and accompanied by Saltine crackers. Think of it as a shish kebab that is all shish, no kebab. While its origins are open to debate, most believe GermanRussian emigrants in southeastern South Dakota – some pinpoint Freeman, and have christened a 30-mile radius around the town “Chislic Circle” – are to thank for the dish, which has become an icon of South Dakota. Lamb, beef, and venison are the meat of choice. “Shashlyk” is a popular dish of cubed meat originating in the Crimea region of Russia, so it seems reasonable that this is what evolved into the beloved regional delicacy few people outside of South Dakota have even heard of.

I’m all about trying regional cuisines, and was eager to sample chislic when we moved here. It didn’t take me long to find it, either. Despite claims that chislic is confined to East River – local slang for the area east of the Missouri River, i.e., eastern South Dakota – it’s pretty readily available in the western part of the state. I’ve had the pleasure of trying about half a dozen versions since moving, and I’ve gotta say, I’m a fan. It’s hard to go wrong with fried cubes of meat!

You might notice in this photo that the meat is not skewered. Only once have I had it served with toothpicks (and it has never been accompanied by crackers, Saltines or otherwise). Out in West River, restaurants usually serve chislic with a side of dipping sauce – often a sweet and tangy barbecue sauce. And the meat has always been beef. Sometimes it’s breaded, other times it’s naked. The only thing consistent across the board? It’s always delicious. The photo above was, hands down, my favorite. The meat was so tender it practically melted in your mouth and was perfectly seasoned. This plate didn’t come with any sort of dipping sauce and it didn’t need it. Hats off to The Gaslight Saloon in Rockerville for dishing up my favorite chislic (so far, anyway). Thirsty’s in Rapid City is a close second, and Jake’s Good Time Place in Pierre (technically East River) was both tasty and skewered, so bonus points for them. Regardless, I haven’t had a bad dish of chislic yet. My next goal is to make a homemade version.

We’ve enjoyed a fine stretch of spring weather the past few days. It’s been in the 70s, comfortable enough to stroll around without long sleeves. After the winter we just had, that’s a novelty. We took advantage on Saturday by hiking to the top of Buzzard’s Roost. It’s a great spot with breathtaking views of the Black Hills, located just five miles west of town. 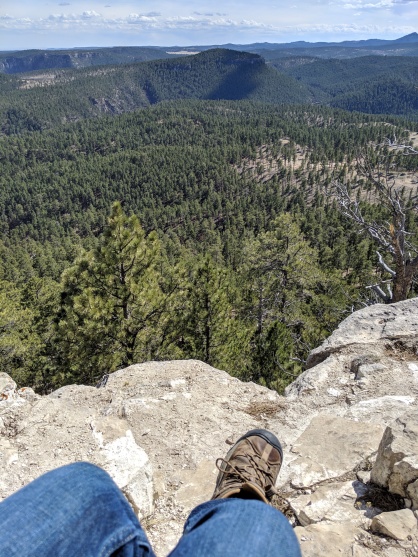 By late afternoon dark storm clouds were piling up to the west and we were treated to our first thunder and lightning of the year. Nothing major, and most of it stayed to the north, but it marks the beginning of storm-chasing season. One of my favorites!

Oh, and speaking of storms…

Yeah. Winter isn’t quite finished with us yet.

I can't get enough of these sunsets lately!
Greetings from Rapid City, South Dakota.
This was how we spent our Sunday. Roof lights to follow (hopefully somebody else will be hanging those for us).
I love how much Rapid City gets into the holiday spirit!
I should never be left alone with Christmas decorations and an empty office.
Moms are fun. Happy Thanksgiving!