Gather ’round, folks. I’ve got a story to share.

Our tale begins on January 2, 2018. We were six months away from leaving the PNW for South Dakota, and while I’d hoped to be able to keep my job with Fuel and work remotely, management wasn’t on board with the plan. While scrolling through Instagram that day, I came across a post from a publishing and media company in Rapid City. Intrigued, I visited their website, and decided on the spot this was a place I wanted to work. They are a small group of creative professionals whose core business is print publishing; they produce a number of magazines, including Black Hills Visitor, a regional travel planning guide, and provide marketing services to locally owned businesses – everything from web development and social media management to design. Everything they do is right up my alley. The only problem? They weren’t hiring a content writer (or any other position, for that matter).

I decided to reach out to them anyway, so I drafted a cold contact letter introducing myself, letting them know I’d be moving out there that summer, and if they ever needed a copywriter I’d love to chat. I submitted it through their website and honestly expected nothing to come of it, so when they emailed me back two hours later to set up a phone interview, I was shocked.

A week later, I had a great conversation with the owner and the managing director. They asked me to send in work samples and promised they’d talk about adding a writing position to the team. I tried not to get my hopes up, but was so excited, Tara and I began discussing the possibility of me moving out here early. A few weeks later, they got back to me and said, while they were impressed with my work, they weren’t ready to add to their team yet. They asked me to keep in touch and stop by when I got to town. I was disappointed but hardly surprised; it had felt like a long-shot anyway.

Exactly six months later, on July 2, I did indeed stop by their office. It was my first day freelancing and I wandered over on my lunch break, since the coffee shop where I was working is located in the same building, immediately next door. The managing director was happy to see me and gave me a tour. Unfortunately, the owner wasn’t in, and I tried a few more times to see him over the summer but he was never available. I finally stopped trying, afraid I’d appear desperate (or they’d think I was a stalker, ha).

Oh, well. It was a nice dream, but clearly not meant to be.

Or so I thought…

Fast-forward to a few weeks ago. Suddenly, a job posting appeared. For a Senior Content Writer. For this very company. Now, I have been gainfully employed since the beginning of the year and was enjoying my job (despite the many challenges in government proposal work), so I debated even responding. But I had too much sort-of history with these guys, and besides, this was truly my Dream Job. Writing creative copy about this place I love so much?! I couldn’t let the opportunity pass me by without at least trying, so I applied online. Figured, maybe they won’t even call.

I accepted without hesitation. How could I not?! This is everything I wanted. And they wanted me. I guess you could call it a case of mutual admiration. Ironically enough, I have John Mellencamp to thank for this job. At least partly; my second interview was the day after the concert, and I happened to mention to the owner that we had gone. “That was a great show, wasn’t it?” he replied. Now, I’d had no idea he had gone to the same concert or was even a fan. For half the interview, we chatted about Mellencamp and rock music while the managing director and creative director looked on with bemusement. Those tickets were the best investment we ever made! (The show was awesome, by the way. I’d gush over that more, but this story is long enough as it is.)

So, last Friday afternoon, I had a difficult conversation with my employer and turned in a letter of resignation. I really hated doing that, but to their credit, they responded with grace and dignity, were totally supportive, and encouraged me to follow my passions. I gave them two weeks’ notice; my last day there will be May 10, and then I begin my Dream Job May 15.

How’s that for excitement?!

Also exciting: Tara and I are now officially house hunting. We looked at our first one last week, and while the online listing was very appealing, it was less so in person. Great location, but too many cosmetic and structural issues. It needs a new roof, for instance. Even our realtor said it was overpriced. So, we passed – but the search continues. We are in no hurry and are both confident our perfect house is out there, just waiting to be discovered.

Also exciting, Part II: we just spent my birthday weekend in Deadwood. Went for a nice hike along the Homestake Trail, checked into our room at the historic Bullock Hotel, bought tickets for a ghost tour, had a fantastic dinner at FLYT Steakhouse, spent a few hours playing video blackjack, and called it a night. After a nice breakfast and another few rounds of blackjack, we checked out and came home. It was a nice little getaway. Next weekend, we’re driving to Jamestown, North Dakota, to meet a blogging friend I have known for 15+ years. 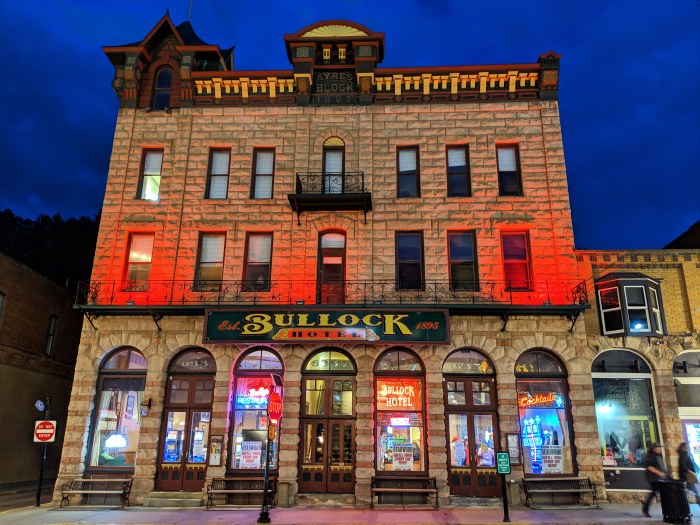 The Bullock Hotel was built in 1896 by Deadwood’s first sheriff, Seth Bullock, after his hardware store burned down on this very spot. 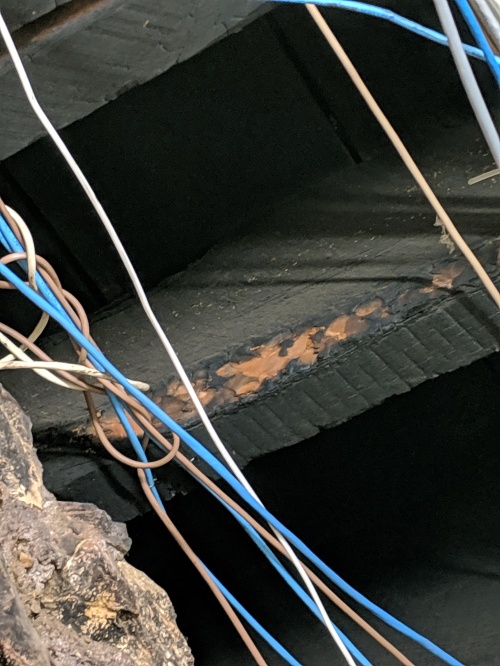 Burned floor joists in the basement.

Whew! Quite a few things happening in my life right now and they’re all good. 2019 is shaping up to be a pretty great year.