I’m not sure if we’re crazy, but we basically just drove 667 miles roundtrip for oatmeal.

I may be grossly oversimplifying the situation. But we did go to Fort Collins, Colorado for a quick weekend getaway in order to stock up on essentials from Trader Joe’s. And it’s the second time we’ve done so this year. But this time, we had a brand new standalone freezer to fill. So, we threw a couple of coolers into the back of the Mazda and headed out Saturday morning, bright and early.

There was no snow and ice to deal with this time, as there had been in March, but the first third of the trip was foggy. By the time we reached Lusk—the first real town of any substance along that stretch of Wyoming—the clouds had broken up. Lusk seems like a charming place, complete with a historic main street and a stagecoach museum. One of these days we’re going to spend a little time there checking it out. 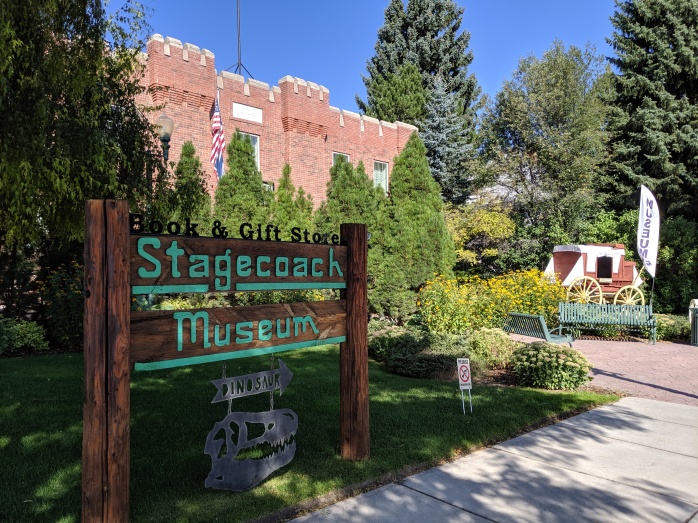 We reached Fort Collins at 1:00 and naturally, our first stop was Raising Cane’s for chicken fingers. Afterwards, we hit a couple of local liquor stores, stocking up on ciders and sour beers—items that are harder to find in Rapid City. We hit the jackpot and scooped up some Wild Roots vodka from one place. Thanks for the tip, dad!

Last time we’d picked a motel a few miles from downtown, but we stayed at a Best Western in the university district less than a mile’s walk from Old Town. This was a much better location and it had a pool, so we took advantage and went swimming before heading out for dinner. We enjoyed the Crown Pub so much last time, we went there again. Killed a couple of hours with good food and drinks, then walked back to our motel, stopping by a couple of funky places along the way.

Fort Collins definitely has a Portland vibe, and there was even an event called Tour de Fat in which people dress up in costumes and ride fat-tire bikes downtown. The locals warned it was pretty outlandish, but it was tame by Portland standards. Translation: no naked people.

Sunday morning, we decided to drive up to Estes Park, a mere hour away. It’s the site of the famous Stanley Hotel, Stephen King’s inspiration for The Shining. Absolutely beautiful drive, and its location at 7,500′ in the Rocky Mountains is breathtaking. We grabbed breakfast and Bloody Marys and wandered through an arts festival before heading back. I would have loved to spend more time checking out Estes Park, but we still had to stop by Trader Joe’s in Fort Collins and drive the 5.5 hours back home. Tara and I have decided to book a room at the Stanley for our anniversary next September. 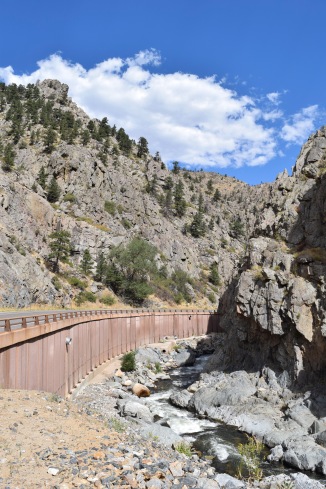 Slot canyon on the way to Estes Park

Got back to town and loaded up two shopping carts’ worth of stuff from Trader Joe’s. This included seven boxes of steel cut oatmeal, six boxes of bird’s nest vegetable appetizers, four boxes of chile lime chicken burgers, and an assortment of soup dumplings, Chinese buns, ginger soy cod, etc. Not to mention the 14 packages of dark chocolate peanut butter cups, but in all fairness, most of those are going to Tara’s coworkers, who all placed orders with her in advance.

We had one last stop before finally heading home: Ridley’s grocery store, where we purchased half a dozen packages of the Basque chorizo we love so much. It wasn’t until 2:00 before we began the long trek back, arriving home around 7:30. All in all it was a fun, if expensive, getaway—but now we are fully stocked for at least six months.

Super thankful that today is Labor Day. It gives us a day to recover before heading back to work. We plan to do not a whole lot other than grill ribeye steaks and enjoy Bloody Marys. It’s supposed to hit 91 today, which will ironically make this one of the warmest days of the summer. Fortunately, it’s only a one-day heatwave. Next weekend looks downright cool.

← Revolving Door
The Third Cut is the Deepest →