Home › Daily Life › I Didn’t Want to be Don Draper

I Didn’t Want to be Don Draper

We recently started watching “Mad Men.” I have no idea what took so long; I graduated from college with a BA in Advertising, after all, and once dreamed of living the Madison Avenue lifestyle. There’s no way I wouldn’t find the show compelling.

What I did not find compelling was advertising. I knew I wanted to be a writer as far back as middle school and initially set my sights on a career in journalism, but there isn’t much room for creativity in the news biz. My dad suggested advertising, and I thought, why not? Becoming a copywriter and churning out campaigns for billion-dollar corporations sounded appealing, so I dove right in.

Halfway through my college studies, I realized that advertising wasn’t for me. I hated the cutthroat nature of the business and despised the idea of trying to sell expensive things to people who didn’t need (and couldn’t afford) them for the rest of my life. By then, I had no interest in switching majors and starting over from scratch—I was tired of school at that point and wanted to get on with real life—so I decided to  push on through, nose to the grindstone. I just wanted that piece of paper rubber-stamped with the governor’s signature and a fancy frame to put it in, figuring being a college grad was enough to ensure doors would open for me.

Well, those doors didn’t open. I had to bust my way through them while taking a long detour to get to where I finally wanted to be. Adding insult to injury? I never even got that fancy frame. My diploma is…somewhere. Honestly, I don’t have a clue where exactly. But it doesn’t matter, because I have learned over the years that a diploma really is just a piece of paper. I haven’t succeeded because of it, but rather, despite it. I mean, three months after graduating from college, I was stocking shelves at The Sharper Image. That’s about as far from the likes of Sterling Cooper as you can get. Customer service and call center jobs followed. Eventually, I powered my way into marketing and, through sheer determination and force of will, writing. It wasn’t easy. But few worthwhile things in life are.

I’m not dissing college. If I had it to do all over again, I still would. I’d just make damn sure I was certain of my career path before embarking upon it.

Watching Don Draper on the small screen, sure—his life looks glamorous. But even if I had followed through on the advertising dream, I remind myself that the Madison Avenue I’d have encountered was already decades removed from the one that exists on the show. Besides, pretty much every male on “Mad Men” is a prick. Fascinating as it is to watch, I can’t help but feel that I dodged a bullet there.

Today’s unusually contemplative post is brought to you by the first day of fall.

The past two months have been a whirlwind of visitors, and this past weekend was no exception. My daughter, Audrey, came up for a visit. When last we saw her, we were backing a loaded U-Haul out of my parents’ driveway, about to embark upon a 1,250-mile journey across five states for a brand new life in the Midwest. That was 15 months and an entire lifetime ago, so we were looking forward to seeing her again.

She arrived Thursday morning and left Sunday afternoon. In between, we did a pretty good job keeping her entertained. Did all the usual touristy things first-timers need to cross off their bucket lists (Mount Rushmore, Custer State Park, Wall Drug, the Badlands). Cooked her favorite meals. Caught up on all the goings-on. It’s hard to say which she enjoyed best: the spectacular thunderstorm Friday night, a classic South Dakota storm that brought rain, hail, gusty winds, and nonstop lightning; or the opportunity to feed prairie dogs by hand. We stopped by Prairie Dog Village just outside the Badlands yesterday (was it really just yesterday??); it’s the only place I have ever been where the prairie dogs are so used to humans they actually run toward (rather than away from) you and eat peanuts right out of the palm of your hands. One of them even licked my fingers. Now, that is about as far from Sterling Cooper as you can get. How is THIS my life?! 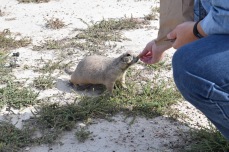 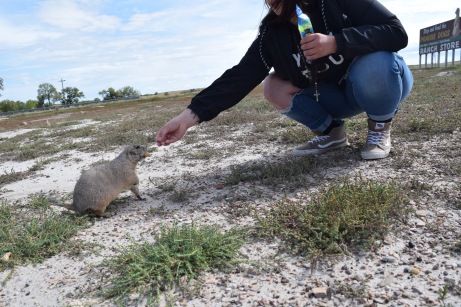 I’m so glad that fall is officially here! It was a downright chilly 39º this morning, forcing me to put gloves on during my walk. The weather is changing right on cue; there’s even talk of a few snowflakes over the Black Hills this weekend. It won’t be long until they’re flying through the air in town, as well. Autumn is hands-down my favorite season but it’s pretty short out here, so I intend to enjoy the hell out of it this year.