The Floor is Lava

After searching high and low for weeks, I finally bought a beanbag chair. Yes, I realize it’s 2019. But when you’ve got a wood-paneled 1970s-era basement filled with lava lamps, records, and a beaded curtain, what else are you going to put down there? A rocker-recliner?!

I suppose a waterbed would have been apropos as well, but if we don’t have room for a pool table, we certainly can’t fit a waterbed down there. (Actually, we could fit either one of those things, but we’d have to climb over them to cross the room, which would be like a game of The Floor is Lava for adults. Come to think of it, that would be fun!)

“Every office needs a hippie,” one of my coworkers said in a meeting last week, and shockingly, she wasn’t talking about me. Clearly, she has not seen my basement.

Anyway. Beanbag chairs, it turns out, are damn near impossible to find. I’m all about supporting local businesses, but was forced to turn to Amazon when my quest proved fruitless. Or beanless, as the case may be. This somewhat surprised me. I thought the classics never went out of style! It was a long, discouraging, empty-handed walk back to my Edsel.

Not to fear; Amazon came to the rescue once again. I am now the proud owner of a super-comfy beanbag chair that perfectly molds itself around my body. In fact, I’m writing this very blog post from said chair. Seriously, I don’t know why every home doesn’t have a beanbag chair. These things are cozy, versatile, and portable. And you’ll never drop loose change or car keys or a cellphone between the cushions because there are no cushions. It’s all one big cushion!

Genius, I tell ya.

Saturday was one of those days where the fog persisted and the temperature never climbed above 21º. This resulted in hoarfrost (a name that always makes me snicker), which occurs when water droplets freeze on contact with objects, creating featherlike crystals. It looks especially compelling when it coats tree branches.

That’s actually a night shot. Tara scored us free tickets to the Rapid City Rush hockey game last night; it began snowing just as we left the house, and fortunately, the snow ended before the game let out. We got about 1″, so nothing major, but enough to convince us to stop by Halley Park on the way home to take pictures of the Christmas lights and aforementioned (ahoarmentioned?) frost.

Wandering around this beautiful setting at 10:30 p.m. was enough to ease the sting of a loss by our hometown hockey team. Didn’t matter; we had fun anyway, and the Rush gave it a good effort.

This morning, I couldn’t resist taking a walk around Storybook Island and taking photos of our winter wonderland. Once the sun came out, those trees were really sparkling! They remind me of the fake plastic ones you put up with a Christmas village. 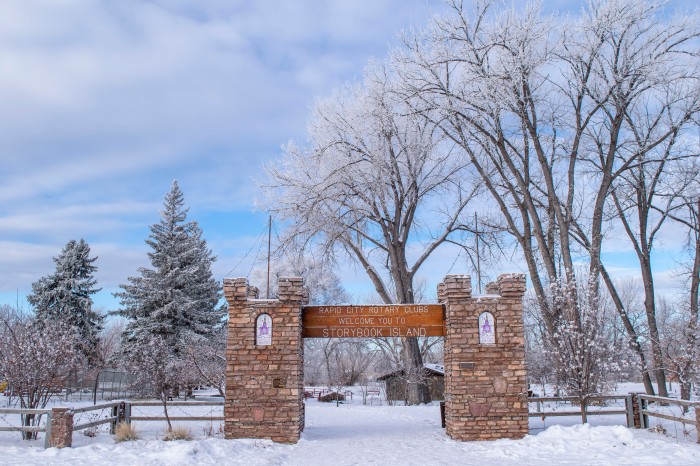 They’re saying our highs might reach the 60s (!) next weekend, so I’m a-gonna enjoy this scenery as much as I can while it sticks around.

This being South Dakota, I’m sure we’ll be back in the twenties a few days later anyway. And because we are flying to Nevada for New Year’s, how much do you want to bet there will be a blizzard threatening our plans?