I Myth You: Truths About V-Day

Happy Valentine’s Day, if you’re into that sort of thing. Funny, the only time I ever cared about V-Day was when I didn’t have anybody to share it with. Back then, I was all, “Woe is me! I’m all alone while all these couples are having romantic celebrations!” I didn’t even really know what these imagined romantic celebrations consisted of, though I was fairly certain they ended with a romp in the sheets, which was enough to justify their existence at the time.

Not that I ever admitted this to anybody, of course. Instead, I adopted a holier-than-thou stance. In the film Eternal Sunshine of the Spotless Mind, Jim Carrey’s character famously states, “Valentine’s Day was invented by greeting card companies to make people feel like crap.” I would repeat this ad nauseam to anybody who cared to listen, proud of my anti-Capitalist rant. When a friend said that Valentine’s Day had been happening since Roman times and the idea that Hallmark invented it was a myth, I replied that the Romans also invented gladiator matches but I didn’t see armed combatants fighting to the death before crowds of bloodthirsty spectators anymore, which is admittedly twisted logic, but I had to defend my position, you know? Plus, I kinda forgot about Black Friday. I’ve seen video of angry mobs fighting over the last 55″ TV in stock, and it’s even uglier than those Colosseum battles. 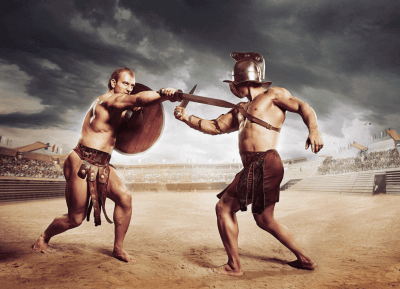 When Tara and I got together, our first Valentine’s Day was romantic. We celebrated by getting all dressed up and enjoying a fancy dinner at Jake’s Famous Crawfish seafood restaurant in downtown Portland. I even drew a red heart on the plate using the frosting from our cheesecake.

Our second V-Day as a couple was a little more conservative. It went something like this:

Me: So, would you like to go out to dinner?
Tara: I don’t really feel like dealing with all those crowds. Unless you really want to.
Me: That’s okay. Let’s skip the fancy meal and just exchange cards instead.
Tara: Perfect!

And then I proceeded to make an off-color joke about “having a heart on for you.”

Funny how things change once you’re in a committed relationship. It’s not that we aren’t romantic. We’ve been together for eight years now, and we’re actually still sickeningly sweet toward one another most days. Just not on the one day where you’re supposed to be sickeningly sweet toward one another. I chalk this up to our rebellious nature, a sort of damn-the-man ethos, if you will.

Nowadays, I am pretty ambivalent about the holiday. I don’t begrudge those who like to pull out all the romantic stops and I won’t trot out all that made-up holiday nonsense. When you think about it, all holidays are made up, right?

We’ll celebrate tonight by partaking in our favorite Friday pastime: playing cards in the basement while listening to records and enjoying cocktails. Knowing me, there will be another off-color joke or two.

And I wouldn’t have it any other way.

Happy V-Day (or not), you crazy fools in love!

← Pretzels are the New Pickles
Conflict of Interest →

22 Comments on “I Myth You: Truths About V-Day”