I’ve been listening to a podcast called “13 Minutes to the Moon” these past couple of weeks. It’s a departure from the usual true crime, news, and entertainment stuff I typically gravitate toward, but with all the crap going on nowadays, that’s a welcome relief. I heard that podcast listenership is way down because nobody is commuting to work these days, but even when I do drive to the office, it takes all of eight minutes, so my podcast habits are unaffected. I listen while walking on the treadmill or outside.

Anyway, the BBC World Service podcast is a ten-part series that focuses on the Apollo 11 mission—more specifically, the 13-minute descent to the lunar surface. Well, technically it took 12 minutes and 49 seconds, but that doesn’t roll off the tongue quite so easily, does it? The podcast talks about how we landed on the moon and provides lots of information about NASA, the history of space flight, the politics of going to the moon, the astronauts and people in mission control, and the technology that got us there. It’s both fascinating and inspiring, a reminder that a determined nation can accomplish great things. It also demonstrates what a miracle landing on the moon was. The fact that we did so six times is amazing to me! Season 2 focuses on Apollo 13 and I plan to listen to that next.

The podcast has reignited my interest in space. Like many children of the ’70s, I had dreams of becoming an astronaut, though if I’m being honest my desire was less about slipping the surly bonds of earth and more about drinking all the Tang. So, I’m planning on rewatching a lot of my favorite space-themed movies. Films like Contact, Apollo 13, Gravity, The Martian, First Man, and Armageddon (hey, don’t judge!).  You might say that “I don’t want to miss a thing” (but probably shouldn’t).

Our season appears to have finally settled on “spring-ish” (i.e., no snow in a week), so we decided on Saturday to attack with gusto our big project of converting the side yard into a garden.

“With gusto” is probably an overstatement. It’s more like, we figured we couldn’t avoid the task much longer. Those seeds that Tara planted continue to grow like crazy and will need a permanent home in the soil in about a month. So, we broke out the standard gardening tools — shovel, tape measure, spray paint — and got to work. OK, maybe those aren’t your typical implements, but if there is one thing you should know about my wife, it’s that she is very much a planner when it comes to this stuff. She plotted out the entire garden in advance, drawing up schematics on graph paper and labeling where every single plant and flower will go. This runs contrary to my usual way of doing things (“this looks like a good enough spot to start digging!”), so we make a good team in that regard. 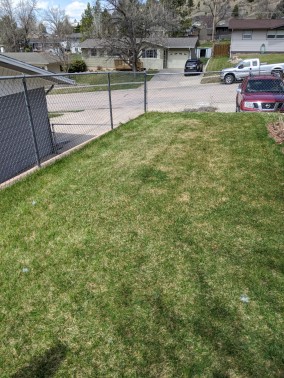 It took about an hour to dig that first bed. The work wasn’t too difficult; I have no doubt we’ll have everything done by the end of May, which is right around the time when we’ll be able to safely plant everything outdoors.

Our vegetable starts might be the size of Audrey from Little Shop of Horrors by then, so if I drop off the face of the blogging earth in a few weeks, you can safely assume I’ve been digested by a giant plant.

It appears that we may be easing into reopening some businesses this week. Our mayor and city council are going to vote on loosening restrictions tomorrow and allowing certain businesses to reopen. There would be strict guidelines: bars and restaurants, for instance, would be limited to one person per 140 square feet; patrons must be spaced apart a minimum of six feet; staff must wear masks and submit to health checks prior to the start of every shift; etc.

Maybe this is controversial to some, but I’m in favor. Our mayor took aggressive action early and, as a result, the virus has been virtually non-existent here. While many of our restaurants have shifted to take-out and curbside delivery, they aren’t making enough money to offset costs and can’t survive being shut down indefinitely. I feel like, with a strong commitment to safety and vigilant monitoring, it’s do-able. Lockdown can’t last forever, and people can decide for themselves whether they are comfortable taking the risk. I suspect even with less-strict guidelines, a lot of folks will continue to avoid going out for some time anyway.

I’ve had several concerned friends reach out to me to see if we’re okay after Sioux Falls, South Dakota made national headlines as one of the country’s top COVID-19 hot spots. Fortunately, they are clear on the other side of the state, about as far away from us as Fort Collins, Colorado. We are separated by 346.6 very non-populated miles. Granted, all it would take would be one infected person from there to visit here, but hopefully that won’t happen. We’ve had a total of 12 confirmed cases in Pennington County versus 1,796 cases in Minnehaha County.

STAY ON YOUR SIDE OF THE MISSOURI, EAST RIVER PEOPLE.

If things do reopen, I might need to consider working part-time in the office in the near future. That’ll be a bitter pill to swallow, as much as I’m enjoying working from home…especially now that it’s warming up (they’re forecasting 84º on Thursday!) and I can work from the backyard. I won’t make any decision on that for at least a week, and am thankful that my employer is fully understanding and not pressuring us in the least.

All I know is, tomorrow’s my birthday, and I ain’t punching into no time clock!

19 thoughts on “The Final Frontier”

No Time for Kings is the story of an intrepid news reporter and single mom entangled in a deadly game of cat-and-mouse with an ecoterrorist group bent on destruction and murder. Order or download a copy today!