I made a Safeway run yesterday, something that has become a high-stress affair. There is so much to keep track of these days, and that’s not even counting the items on your grocery list. Gotta make sure you have hand sanitizer. Mask. Hazmat suit. But for me, those one-way arrows directing the flow of traffic are the worst. 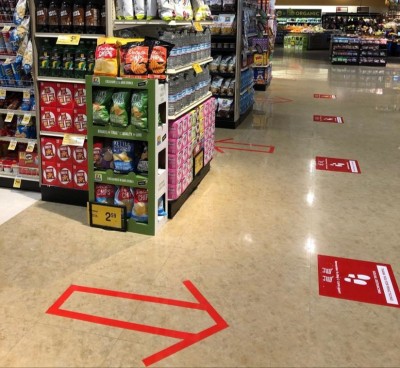 I inevitably find myself glaring at the scofflaws who end up going in the wrong direction, but they are masters at avoiding eye contact. I swear, some of them are doing it on purpose; you can tell by their steely looks of determination, almost daring you to call them out on their faux pas.

I’m too much of a by-the-book guy to flaunt the rules myself; in fact, at one point I found myself inadvertently wandering the wrong way down the cereal aisle and quickly overcorrected by doing a very poor imitation of Michael Jackson’s moonwalk. I’d hate to be labeled a smooth criminal. 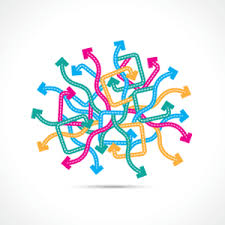 The aisles are pretty straightforward, but it’s the open areas with multiple bins, like the bread/bakery and produce sections, that are most confusing. I don’t blame people for getting turned around there. The arrows diverge in multiple directions seemingly at random. Go this way for butter, that way for buns. This way for asparagus, that way for oranges. It’s like a giant maze—and much like laboratory rats, if you navigate it correctly, you are rewarded with cheese.

At one point I was pushing my cart down the produce aisle when an older gentleman smiled at me and gave me a thumb’s up. I figured he was maybe congratulating me on following the arrows so expertly, so I returned the gesture as he, too, was going in the right direction.

A few moments later, we crossed paths again. “Thank you!” he said.

“No problem!” I replied.

“How long have you been in?” he asked.

I started to say, “Twenty minutes or so. Got a short list this week.” At that point I noticed he was looking at my ELLSWORTH AIR FORCE BASE t-shirt, and suddenly it all made sense. He wasn’t thanking me for my flawless ability to follow directions, but rather, my service to the country.

My [nonexistent] service to the country.

My dad was in the Air Force. I was not. I did live on Ellsworth AFB for three years back in the 1980s, and we make a trip out there whenever my parents come to visit. I picked up a few shirts from the base exchange last year and wear them on occasion. It never occurred to me that somebody might think I was an actual airman.

By now, I was stuck. My only choice (short of admitting that there had been a rather embarrassing misunderstanding on my part, which of course was never really an option) was to press forward with the little white lie. I soldiered on, if you will.

“Two years this June,” I answered. Which, in my defense, is when we moved to South Dakota.

“I was stationed there myself for four years,” he said.

“Small world!” I replied. I wanted to add some Air Force-related phrase, one that would be bandied about by fellow airmen, an attempt at a Band-of-Brothers type camaraderie, but the pressure was on and all I could think of was Semper Fi, which belongs to the Marine Corps. The jig would have been up in a heartbeat, so instead, I said, “Oh, there are the avocados! Gotta run. Have a good day!”

Later on, I realized I could have said “Aim high!” or “Fly-fight-win!” and that would have won me mad respect. OR, to really convince him I was legit, I could have said, “Look at all these shoppers breaking red. There’s no discipline these days, amirite?!” This refers to walking outside the designated personnel areas (marked in red) on the flight line or not using the designated entry and exit control areas. Perfect for the situation, huh? Talk about a missed opportunity.

The penalty for breaking red, by the way, is having your face pressed to the ground with a boot on your back and an M-16 aimed at your neck.

← All Flamingos are Pink
Gettin’ Jiggly With It →